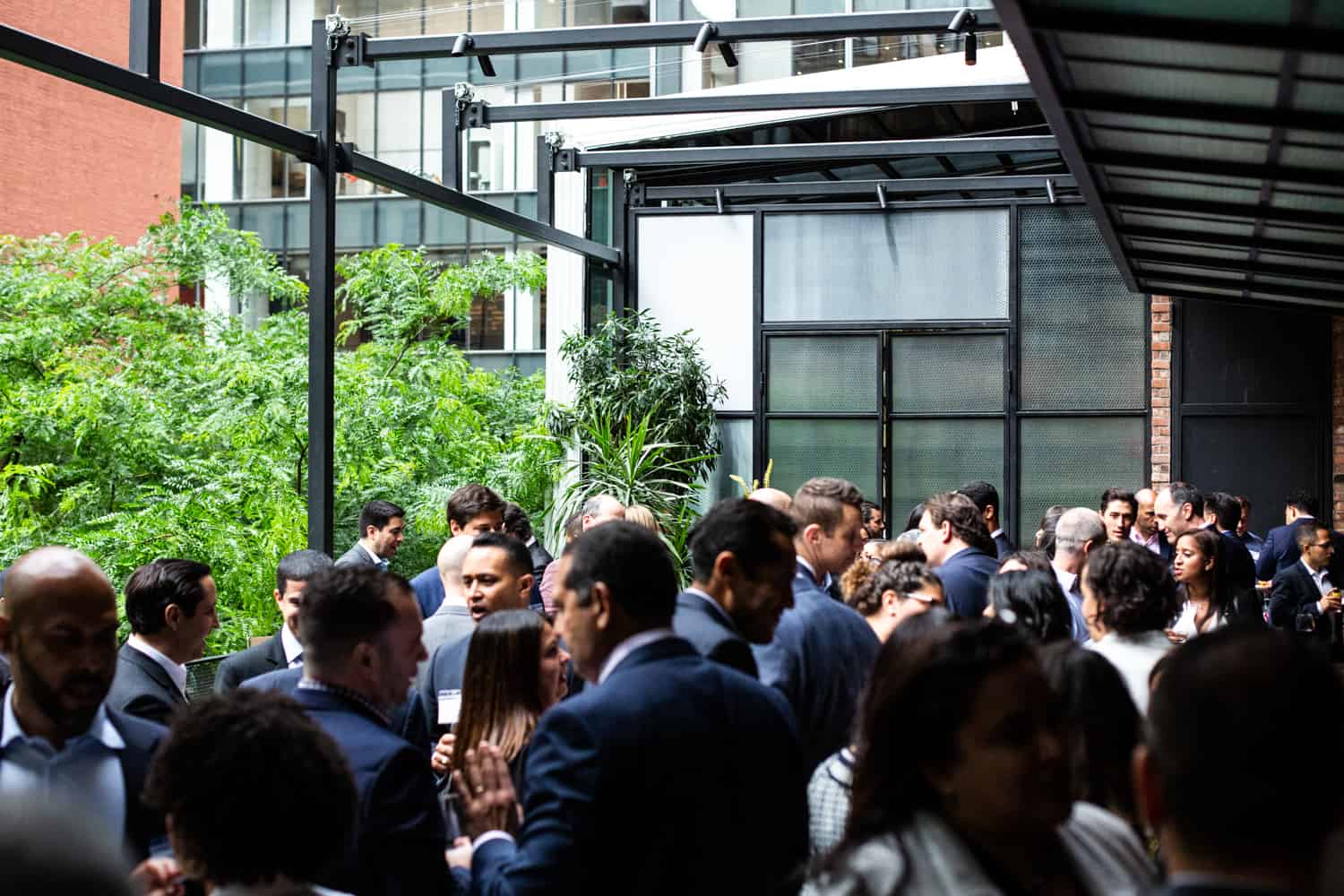 NEW YORK –The Alumni Society hosted its the fifth annual Leadership Summit on June 13 in midtown Manhattan at Second NYC.

The summit kicked off with a morning networking breakfast followed by welcome remarks by summit host Eva Hughes, founder and CEO of Adira Consulting, and Oris Stuart, chief diversity and inclusion officer for the NBA, who reminded attendees about the power of their networks and to leverage the summit for relationship building.

The first leadership session of day was led by Hughes who interviewed luxury CEO Robert Chavez from Hermès of Paris, Inc. They discussed digital disruption and managing change, creating a family culture at Hermès, and Chavez’s path to leadership, including growing up in San Antonio.

On managing disruption in his life and in business, Chavez emphasized the importance of reflection. “The only consistency in life is change. Then, it’s about allowing yourself those quiet moments to think, ‘OK, how can I deal with this?’”

The second diversity spotlight of the day featured Patricia Pacheco, director of multinationals corporate banker in North America for Bank of America Merrill Lynch. Pacheco reminded attendees, “It’s important for all of us to give back. Each of us, no matter our journeys, cannot forget where we come from, and the responsibility we have as Latino professionals to open doors, to advocate for those behind us.”

Next up was the 10x Lightning Talks session, featuring six dynamic speakers onstage for ten minutes of inspiration, innovation, and insights. The session began with Rosanna Durruthy, head of global diversity, inclusion, and belonging at LinkedIn, who inspired attendees to think about ten things they want to do over the next ten years. Then, Andrea Perez, vice president and general manager of Jordan (Women/Kids) at Nike, shared secrets to building a personal brand and challenged attendees to think about their bigger ‘why’. Miguel Quiroga, CEO of Visible, enlightened attendees with a presentation on the power of innovation and simplicity. Esther-Mireya Tejeda, head of corporate communications and PR at Entercom, candidly spoke about her own struggles with imposter syndrome and challenged Latino leaders in the room to know their worth. Jennifer Lopez, head of product development at Capital One Labs, shared her playbook for successful innovation organized into five lessons, including “your first idea isn’t good,” and “saying ‘no’ always takes more courage than saying ‘yes.’” Last up was Steve Aguirre, founder and CEO of Real Growth Inc., who challenged members to rewire traditional ways of thinking into formulating questions rather than making statements.

“What if we could rewire our brains, so our first instinct was to ask a question rather than make a statement? The longer the question, the more it’s about you. The shorter the question, the more it’s about them. Keep your questions short,” concluded Aguirre before the networking lunch hour. Following both leadership sessions, a networking lunch provided an opportunity for attendees to engage with their fellow members through spirited and productive discussions.

The afternoon sessions began with the introduction of The Alumni Society’s first capital partner, VamosVentures, a Latinx VC fund for Latinx entrepreneurs. “We were told by many folks, ‘There are no Hispanic tech entrepreneurs.’ Well, we started looking, and we found plenty,” said Marcos Gonzalez, founder and managing partner of VamosVentures. “A lot of people from The Alumni Society have been engaged in VamosVentures. We all believe in some very basic truths: we have the talent to do great things, business is a viable and justifiable strategy, and we need capital and wealth in our community.” The capital partnership offers Alumni Society members career opportunities with VamosVentures-funded companies and access to its asset class.

Next to the stage was Bertika Quintero, senior director of sales, northeast area, for Eli Lilly and Company. A first-generation Cuban American, Quintero recounted her first year working for Eli Lilly, where she tried to “fit into something she was not.” When she remembered her mother’s words, “You are enough,” she began bringing her whole self to work, which also helped her align with the company’s largest division, diabetes. Hispanics, along with African-Americans (the two communities Quintero identifies with), are the most predisposed to diabetes in the US. Her takeaway: “Use your uniqueness to shape what the company does and how it does it.”

The main afternoon session happened in two parts: first, Monica Mandelli, managing director of KKR, interviewed Katia Beauchamp, cofounder & CEO of Birchbox, who launched the industry-changing beauty company while attending Harvard. During this session, Beauchamp offered some business-leadership advice: “Protecting your employees from failure disengages your employees. Part of the real responsibility is understanding that people can fail, yet still be successful.” Soon, four additional Latina entrepreneurs (Susie Jaramillo, cofounder, president, and chief creative officer of Encantos Media; Marina Diaz Ibarra, partner and managing director of Wolox Inc.; Carolina Bañales, founder of Eyecue Insights; and Carolina Huaranca, principal of Kapor Capital) joined Beauchamp and Mandelli onstage for a panel discussion about Latina leadership. This powerful conversation garnered much praise from both the audience and the speakers, who openly discussed such topics as being coached to remove a wedding ring so investors wouldn’t worry she would soon have children to distract her from the business, as well as the misconceptions about employing mothers. “This person did not become less ambitious because they’re bearing a child, [bearing a child] arguably makes them more ambitious!” said Beauchamp. Leadership advice also flowed from the conversation: “Cultivate foresight and cultivate initiative—these are some of the best things you can do as a leader,” said Jaramillo.

After a lively Q&A session with our panelists, Erika Irish Brown, chief diversity officer for Goldman Sachs, took the stage. Though new to the role, Brown spoke of Goldman Sachs’s long track record of cutting-edge D&I initiatives, looked to the future to show what the company is doing now, then turned the attention to the audience. “D&I is all of our jobs,” she said. “As senior Hispanic/Latino leaders, I ask you to think about what your legacy will be. How are you advancing Hispanic/Latino leadership at your firm?”

To begin the final presentation and closing remarks for the summit, Alumni Society cofounder Pedro A. Guerrero delivered a video message from US presidential candidate and Class of 2019 member Julián Castro. “I hope that this gathering has been an opportunity to network, to exchange ideas, and to recommit yourself to doing the hard work in your own field to ensure that everybody can prosper in this country. . . . Today, we need your energy, your talent, and your commitment more than ever before.”

Then, Ricardo Anzaldua, general counsel of Freddie Mac and cofounder of The Alumni Society, joined his fellow cofounder in honoring every Class of 2019 member who attended the summit. Honorees were given an award and took a photo with Guerrero and Anzaldua. To close the day, summit attendees enjoyed food, drinks, and lively conversation in a networking cocktail hour.

In his closing remarks, Guerrero said, “What I hope transpires for all of you through The Alumni Society is that you’re able to accomplish some goal or perhaps even fulfill a lifelong dream.”

Relive key moments from the summit through our Instagram story.