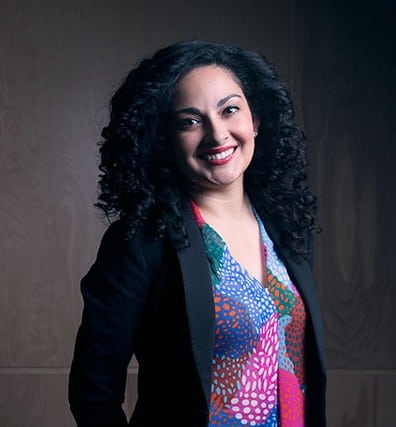 It’s not hard to find the common thread in Eliana Murillo’s career. From her days at Harvard University to her time at Google, she’s looked to create and identify opportunities for underrepresented people and groups. “People always say it’s about who you know, but what if you don’t know anyone?” she asks. It’s a question that haunted Murillo—and drove her to action.

As a young Harvard student, she noticed a gap between students and employers. “My friends and I were always hearing about the same kind of opportunities or only hearing about jobs in certain industries, but we didn’t have role models or mentors who could show us the ropes,” she says. “We wanted the chance to get on the ground and learn from people in other areas, with different backgrounds, in other roles that interested us.” She started cold calling companies, asking for the chance to make office visits, solicit résumé feedback, and build mentoring relationships with working professionals. She invited businessmen and women to Cambridge, Massachusetts, to give presentations to her peers.

This passion for building strong friendships and finding opportunities was seeded as Murillo pursued a bachelor’s degree in sociology with an emphasis on multicultural consumer markets. By her second and third years, she realized something was missing in on-campus networking. “As I got involved in student groups and preprofessional organizations, I noticed there was a need for diversity,” she says. “Women and Latinos especially didn’t always know about the career paths and opportunities in front of them.” Murillo launched several initiatives, including a Latino business student organization, and helped start a conference about Latina empowerment and development. The goal was to increase exposure to professional organizations among the minority population in her area.

She calls that era a “prequel” to her adult life and her work leading multicultural marketing at Google.

The networks and relationships Murillo built ultimately helped her land an internship at Google after she helped several classmates land jobs with the company, which is consistently ranked as one of the best companies—regardless of industry—to work for. “Google participated in our development program. I didn’t apply because I was interested in marketing and not software, but my friends who got internships before me opened my eyes to the other career paths in the industry,” she recalls.

When she started a Google internship the summer before her senior year at Harvard, Murillo was surprised; she was trusted to do important work and given similar responsibilities to those of full-time Google employees—or “Googlers.” Soon, she was working with small online advertising strategies and helping minority business owners leverage tools to succeed in the digital age.

Since Murillo’s family owns and operates California-based distillery and distributor Tequila Alquimia, she was keenly aware of the challenges small business owners face. She also knew what it would take to develop her career in a fulfilling manner. “When I decided to pursue a career in business, my mother asked who I would be helping,” she says. “I’ve always known that everyone needs friends and mentors who can help them succeed, and that our community needs us to represent them.” That’s why she wanted to help other minorities connect with leaders and industries while at Harvard, and it’s work she’s pushed herself to continue at Google.

In 2013, Murillo founded Hispanic Opportunities in Leadership and Advocacy (HOLA), Google’s Hispanic employee and business resource group. The group has grown from two founding members to more than 150 Googlers across more than ten offices in the United States. These are individuals from the broader network of Latino Googlers who dedicate their time to special projects, which impact the community and the business.

The Googlers meet regularly and have an annual summit, during which they discuss how to bring perspective to existing projects, incubate new projects, or offer their skills to the business community.

At first, Murillo dedicated 20 percent of her time to the project; now, the projects she started with HOLA have become some of the prototypes that inspired her to create her full-time job. Murillo founded the multicultural marketing team at Google and calls her role an “evolution,” adding that she’s always looking to develop insights about users and build partnerships with organizations that have scale and reach in the community to show how they can use Google products to reach their audiences.

Her work with the family business helps. As chief marketing officer of the all-natural, organic tequila company, she’s seen how a humble endeavor can flourish if the people behind it leverage their resources well. “Both of my parents also have other jobs, but we moved forward with this as a family project,” she says. “It is our way of making an impact in Mexico by promoting organic agricultural methods, as well as in the United States, by bringing the consumer an eco-friendly, sustainable product. It’s allowed us to stay open to learning new things about an entirely different industry.” Together, the family produces an award-winning product that has been rated the best tequila in the world, which Murillo markets online.

What keeps Murillo going is her passion for supporting start-ups and entrepreneurs while advocating for minority business owners and consumers. “Latinos are the fastest-growing group of small business owners today, and we have to give them the tools and resources they need to grow so they don’t fall behind,” she says.

In addition to small business growth, Latinos also over-index on both smartphone use and online video consumption—and brands are taking notice. Murillo and her fellow Googlers are developing insights and best practices to understand the demographic’s growing influence.

Murillo encourages other women and Latinos in business to make themselves indispensable. “Become critical talent and turn whatever makes you unique into your value-add,” she says. “Don’t be discouraged if you’re not like the norm. Embrace that, and leverage it.” Though her career is moving at a faster pace than before, she still takes time to build her networks and mentor others. “I’ve gotten to where I am because of others,” she says. “And now I want to see how many people I can bring with me.”

“It is remarkable that the profiles of these líderes all show a common pattern: a reliance on the strength of their backgrounds—the places and people they are from.”—Terhilda Garrido