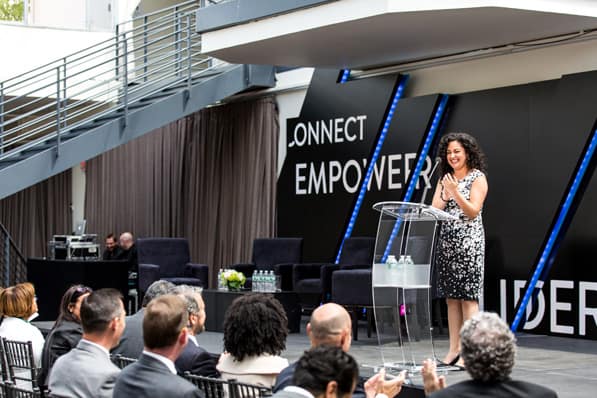 Halfway through her opening remarks, Eliana Murillo turned her back to the crowd.

She lifted her phone, urged everyone to smile, smiled herself, and touched the button, capturing the first selfie of the inaugural Alumni Society Leadership Summit.

The summit, which took place June 25 at Tribeca Rooftop, kicked off with welcome remarks from Murillo, head of multicultural marketing at Google and master of ceremonies for the event, and Ricardo Anzaldua, executive vice president and general counsel at MetLife and cofounder of the Alumni Society.

“I wouldn’t be the millennial emcee if I didn’t ask to take a selfie with all of you,” Murillo said, drawing laughter from the crowd. “You guys might laugh, but someday you’ll look back and say, I remember that person.”

Murillo recently attended the first Harvard alumni reunion for Latino graduates, where Jorge Ramos, a member of the Alumni Society, was the keynote speaker. In that speech, he told the crowd, “You’re expected to do extraordinary things.”

It was that type of thinking, Murillo said, that prompted her to agree to serve as master of ceremonies for the event. She sees the need for networking opportunities for Latino leaders in corporate America, and this event provided that chance.

When Anzaldua took the stage, he said the idea for this event has been something he’s been talking about for 30 years. “But I never had the right platform until Hispanic Executive”—the summit’s organizer—“named me one of itslíderes.”

The Alumni Society, he explained, focuses on business because the agenda of Latino advancement is necessary in the private sector. “We want to change the face of these institutions and network with one another.”

Anzaldua spread his hands as he asked the question on the minds of critics: “What is the need?” He shrugged. “It’s a story of good news and bad news.”

Forty years ago, Latinos had to confront overt racism. Today, overt racism is unacceptable for leaders in corporate America. “We have to realize we’ve made a lot of progress,” he added. But it isn’t enough. “Diversity and inclusion are good and valuable for us, for our institutions, and for society at large,” he continued. “We realize that. But while we espouse these values, we don’t walk the talk.”

Inclusion in the leadership roles of corporate America is still low, especially in comparison to population demographics. There are several arguments critics use to explain this away, Anzaldua said. One is that there are no Latino candidates suitable for these roles.

“Look around this room,” Anzaldua said, and applause broke out. “There are thousands and thousands of qualified Latinos.” Earlier in his speech, he pointed out that there was a time when you could count on one hand the number of Latino graduates of the top American universities. That is not true today.

But there is another element that keeps Latinos out of the executive level. One lens used to determine promotion is called “cultural fit.” Anzaldua was candid. “‘Cultural fit’ is code for ‘people like me.’ For a white male, a person he’s most comfortable with is a white male,” he said. “That’s the catch-22.”

The leaders of corporate America, he concluded, need to take responsibility for diversity and inclusion. Access to opportunity for Latinos will not improve through a passive desire for change. It will improve when it’s made a priority by leaders.

“We need to put extremely competent people on the road to leadership within our organizations,” Anzaldua reiterated. “Some of us began this work 40 years ago, but this is another step in the continuum.”

About The Alumni Society

The Alumni Society is for Latino business executives who share the distinction of having graduated from America’s top universities. Our mission is to stimulate long-lasting connections among successful and inspiring businesspeople who share an affinity for their culture and for their alma mater, with the objective of promoting diversity among the senior-level leadership of corporate America. The Alumni Society hosts an annual Leadership Summit and releases an annual magazine.