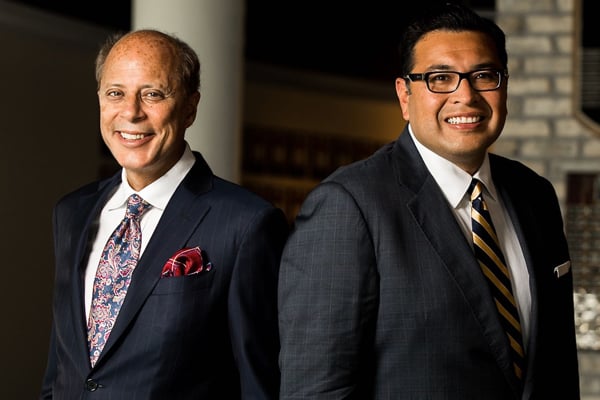 A conversation with Andrés Tapia and Dr. Robert Rodriguez about their newest book, Auténtico: The Definitive Guide to Latino Career Success

“We looked at each other and said, ‘There should be a Latino version of this,’” says Tapia, who is a senior partner responsible for leading Korn Ferry’s global diversity and inclusion strategy and a member of The Alumni Society. 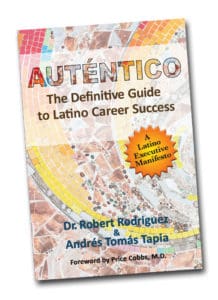 That was the start of Auténtico: The Definitive Guide to Latino Career Success, which Tapia and Rodriguez cowrote. “Because of our backgrounds, because of what we do, we thought we’d be in a pretty good position to write it,” says Rodriguez, founder and president of consulting firm DRR Advisors.

Although both Tapia and Rodriguez have worked extensively in the diversity and inclusion world, writing this book unveiled new revelations. “Those revelations pushed us to come up with new solutions in the respective platforms that we have,” Tapia says. “It’s instigating a ripple effect on others who are also interested in the whole advancement of Latino leadership and talent.”

The Alumni Society spoke with the coauthors about their writing process, the deeper realization about authenticity they uncovered during the interviews, and how they coined the term “The Corporate 4 Percent Shame.”

What were some of your expectations before diving into this project?

RR: Initially, we thought we’d take an approach similar to Cracking the Corporate Code.  We expected to hear stories of personal triumph, and we were ready to ask, “What are the secrets to your success?” We, of course, did see this, but it unfolded a bit differently than what I anticipated.

AT: There was an interesting twist in our research. The working title of the book had been Éxito, The Latino Executive Manifesto. We wanted to uncover the secrets of success and, as researchers, we were looking for the deeper story. Turns out, the deeper story was this issue of autenticidad, authenticity. No matter what industry, gender, whether they were born in the US or emigrated from Latin America, authenticity came up over and over again—not just about authenticity as a leader but also authenticity in one’s Latino heritage and resolving the inevitable identity struggles Latinos face as they try to move up the career ladder in corporate America. So, the title shifted to Auténtico. “Success” moved to the subtitle. Success we realized was the outcome, while Autenticidad was the source.

Tell me about the process of creating Auténtico.

RR: The first process was to identify the pool of Latino and Latina executives. We knew that was going to be a key part of our book, and we came up with a robust list. We looked at Latinos and Latinas who were in the C-suite and on corporate boards. We wanted to talk to those who had reached the highest levels within corporate America. We were deliberate in limiting the research to the minority experience of Latinos in the US because it stands apart in key ways to what Latinos experience in Latin America where they are the majority.

AT: From a mechanical perspective, having two authors is a dance because we both have our own unique voices and platforms. And we’re both published authors. The reason we started this book in the first place that we were simpático with one another. We’re friends and there’s a lot of synergy in our values and in how we thought, but we also have some differentiated experiences, both as Latinos and as consultants in the D&I space.

RR: I truly believe that in putting our ideas together, we came out with a much stronger book than if either one of us had written it on our own.

During the interviews, was there anything surprising that you learned?

RR: We went into this book wanting to address the topic of power and influence because it was a big part of Cracking the Corporate Code. But the answers from the  Latino executives  surprised us when it became clear that they were hesitant to discuss it.

AT: It really was surprising—particularly in how much it stood in contrast with how the African American executives in Cobbs’ book leaned into the topic. So we decided to do a compare and contrast study between black views of power, among executives, versus Latino and Latino executives. We wanted to find out the migration, social, cultural,  and religious roots that had contributed to different attitudes toward power.  A corollary to the power issue was a struggle among Latino executives as well as Latinx with feeling comfortable declaring ambition. These corporate men and women clearly had ambition. But the difference was in being public or open about the ambition.

You’ve coined the term, The Corporate 4 Percent Shame. Was this something that you were using prior to writing the book, or did that come about during the writing and interviews?

AT: It came about when we were writing the book. As writers and thought leaders coming across data, it’s our responsibility to come up with sound bites that capture the zeitgeist of whatever point we want to make. Somehow in one of our riffs, we came up with The 4 Percent Shame.

RR: We just don’t want corporations to get off the hook. As we looked at the data, the number of Latino high school dropouts is going down, more are going to and graduating from college that ever before. And now we’re a much bigger percentage of the employee population. But with all these things on the rise, then why are only 4 percent of corporate executives and board members Latinos and Latinas?

Corporations espouse that they’re colorblind and gender neutral as a vital tenet of a meritocracy—that people only move up based on their performance. But, clearly, when Latinos go from 17 percent of the population to only 4 percent of executive leadership, then something else has to be going on. We can’t have all these other indicators moving up and the number of Latino/Latina leaders staying flat. That’s where the saying came in. Either you’re hiding it or you’re trying to avoid it.

What would you both say is the biggest takeaway from this book?

RR: People seem really appreciative of this book giving them a voice or helping them be more articulate with what they are experiencing. One of the big takeaways is making the whole discourse and narrative around this issue of being a Latino in corporate America. I do hope it is allowing them, particularly the next generation of Latinos and Latinas, to see their ethnicity as a social strength and as an asset.

AT: It’s hard to gauge, but it’s created a collective consciousness that we’re contributing to. It’s affecting the discourse and the consciousness of Latino professionals who are giving language, role models, and healthy challenges to the Latino community so we can address the barriers to our aspirations in a more systematic, collective, self-aware way. We sought to be bold by creating a ten-point manifesto that we published as a summary of the entire book. It’s a call to action.

RR: Andrés and I see ourselves in this book. We both agree that we wish Auténtico would have been available for us when we were younger in our careers. It would have helped us better navigate corporate America. Because it is so focused on being authentic, we see this stuff play out every day.

To give you an example, one of the organizations that enjoyed the book was CNN en Español. They reached out and said, “Hey, we’d love to interview, to talk to someone on set and on camera about the book.” Because Andrés was raised in Peru and is fluent in Spanish, he was able to take advantage of that opportunity. I’m not fluent in Spanish, so I couldn’t participate.

Andrés, I don’t know if I shared this with you, but when I watched Andrés on TV live, my sons were with me. They were like, “Dad, it’s kind of a bummer you’re not there.” I said, “See, that’s why I’m trying to push you to speak Spanish even better than I do. Because that’s just one aspect of your Hispanic heritage that can serve you well in the future.”

AT: I didn’t know that story, that part of it. Thanks for sharing. Kind of teaching moment, right?

This interview has been edited and condensed. All photos by Jorge Camargo.