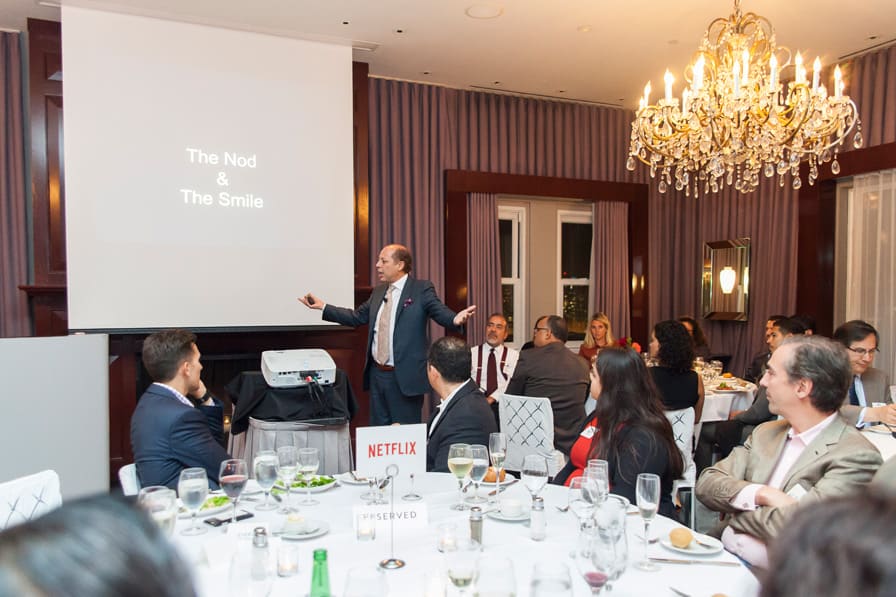 What does “Latino” mean to you? Ask 50 members of The Alumni Society, and you’ll receive 50 answers.

Judging by the reactions of Thursday night’s attendees, that isn’t a bad thing. Andrés Tapia, senior partner and global solutions leader in the workforce performance, inclusion, and diversity practice at Korn Ferry, spoke at The Alumni Society’s first regional event about culture and how it informs our methods of communication. Netflix was the presenting sponsor of the event, which included three speakers, dinner, a cocktail hour, and breakout sessions. Facebook, Goldman Sachs, Kaiser Permanente, and MetLife are 2015 corporate partners of The Alumni Society, and also had a presence at the event.

Eliana Murillo, head of multicultural marketing at Google, opened the evening with welcome remarks about how The Alumni Society has given her a new network and fostered opportunities for discussion about inclusion.

Tawni Cranz, chief talent officer at Netflix, spoke about the streaming provider’s journey from startup focused on growth to multinational company that emphasizes diversity of thought. “Because we didn’t speak about diversity, people thought it didn’t matter,” she said of the company’s culture before inclusion became a core initiative. “Despite having a culture of meritocracy and having a strong foundation of ‘the best ideas come from anywhere,’ we needed to be explicit in saying to our employees, ‘Diversity and inclusion matter. Let’s figure out together how we can increase our overall diversity!’”

There were many obstacles in creating an inclusion-focused workplace, Cranz said. One was the myth that to choose a diverse candidate was to “settle” for someone less talented. That idea sparked Cranz to action, and she was part of a team that worked to change the culture of Netflix to the welcoming environment that exists now.

The subject of Tapia’s talk is one he’s covered at length and in several forms of media. Tapia is the author of a six-part LinkedIn series, #Latinopalooza, and the book The Inclusion Paradox: The Obama Era and the Transformation of Global Diversity. In 2013, he gave a TEDx talk about diversity practices that make sense in today’s geopolitical and business environment.

Tapia’s Catalyst discussion about Latino culture and communication began with his own story. He talked about traveling from a child in Perù to the United States and the differences, both good and bad, that he observed. “When someone threw a ball to me, I kicked it,” he said with a laugh.

Tapia touched on several points, including the choice of assimilation or adaptation and the differences between archetypes and stereotypes. Archetypes describe how certain demographics tend to behave, while stereotypes assume every member of a demographic will fulfill that archetype. “It is appropriate to talk about archetypes,” he added, tying into Cranz’s assertion that talking about diversity is the only way to foster it. “We can’t assume that will always lead to stereotyping.”

The evening ended with breakout groups in which Tapia posed questions to each table, who discussed their answers among themselves. Many different versions of what it meant to grow up Latino and what it continues to mean in their professional lives emerged from the discussion.

Ultimately, the Catalyst event reminded us to be cognizant of the ways culture affects modes of communication. Sometimes that’s obvious, such as language barriers. Often, it’s subtler, and the only way to know about it is to talk about it.

The Corporate Ladder is Dead